For more than half a century, the school of the late Grand Ayatollah Imam Abul Qassim al-Khoee has been an undepletable spring that enriched Islamic thought and knowledge.
From his school graduated dozens of jurists, clergymen, and dignitaries who took it upon themselves to continue his ideological path which was full of achievements and sacrifices in the service of the faith, knowledge, and society.
Among those are outstanding professors of parochial schools, especially Holy Najaf and Qom. Some of them have attained the level of "ijtiihad" - competence to deduce independent legal judgment enabling them to assume the office of supreme religious authority.
Others reached lofty levels qualifying them for shouldering the responsibilities of teaching and education. Most distinguished among those towering figures is His Eminence Grand Ayatullah as-Sayyid Ali al-Hussaini as-Seestani.
He ranks among the brightest, the most qualified and knowledgeable of Imam al-Khoee's former students. In the following account, we try to paint a picture of this meritorious cleric.

His birth and upbringing

As-Sayyid as-Seestani excelled his peers, especially in the power of his interjections, his quick wit, his prolific research in jurisprudence, biographies of narrators, and his keeping abreast with many theories in different fields of theological sciences.
There used to be great competition between Martyr Ayatullah Mohammed Baqir as-Sadr and as-Sayyis as-Seestani. In 1380 A.H. and in recognition of his achievements he was awarded a permit by Imam Al-Khoee and another [permit] by ash-Shaik al-Hilli, certifying that he had attained the level of (ijtihad)- ability to deduce independent legal judgment in matters of religion.
In the same year he was awarded a diploma by the distinguished traditionalist and scholar ash-Shaikh Agha Buzurg at-Tahrani testifying to his skill in the science of "ilmerrijal" biographies of 'hadith' and prophetic traditions. He was then 31 years of age.
For the past 34 years as-Sayyid as-Seestani has been just teaching the different disciplines in the parochial school and researching while at the same time writing many books on jurisprudence, fundamentals, the judiciary and transactions, 12 treatises on certain acts of worship and transactions, one critique of Aradabili's treatise of rectifying the chain of authority of narrators of 'hadith', a treatise on the conduct of scholars of old on the authority of reports.
This is in addition to other manuscripts and manuals of religions dispensation for reference by the followers (muqalideen). His research and teaching methodology His is a unique methodology. Regarding "Fundamentals" his methodology is characterized by the following:

Unlike traditional professors of theology who have no tendency for inventiveness, as-Sayyid as-Seestani and Martyr as-Sayyid as-Sadr are in a class of their own. They go to greater lengths to give the answer to a problem with the need for and interest of research in mind. For instance as-Sayyid as-Seestani approached the problem of the usage of the word in different meanings; the fundamentalist discussed it from the perspective of possibility and impossibility, as a rational and philosophical research, whereas he discussed it from the perspective of incidence and incidence because such a discussion offers the strongest proof of possibility.
He also discusses it from the angle of the patent meaning of the text and its latent one. When he embarked on discussing the question of proportionality and peropndearnce, he has maintained that the main thrust of the discussion lies in the causes of varying texts of traditions.
If these causes are investigated, using historical evidence, and the differences in legal texts pinpointed the complex problem facing the jurist. The researcher and anyone making use of the texts of the Prophet and his Progeny would disappear. This in turn would render the reports of preponderance and change redundant.
The same question was tackled by Martyr as-Sayyid as-Sadr who discussed it from a rational point of view only. Comparison between the different schools of thought In order to put forward a sound study for any subject, as-Sayyid as-Seestani compares his findings with those of al-Mirza Mahdi al-Asfahani, representing Mashhad school of though, as-sayyid al-Burujardi, of Qom, and the three textual critics, as-Sayyid al-Khoee, and ash-Shaikh Hussain al-Hilli, representing Najaf.

His juristic methodology has the following distinct characteristics:

Those who come into close contact with as-Sayyid as-Seestani will discover that he is endowed with ideal spiritual traits. Of these are the following:

As-Sayyid as-Seestani is not a jurist per se. He is a highly educated man who keeps abreast with modern vision with regard to the development of political and economic thought. He has very good ideas in the realm of administrative theory as well as social thought that is compatible with modern progress. With all this in perspective, he views the dispensation of religious edicts as a right of good path for the Islamic society.

Office of the supreme religious authority

Some professors of an-Najaf center for teological studies (Hawzat - an-Najaf) were quoted as saying that after the death of a-Sayyid Nasrullah al-Mustanbit they advised the late as-Sayyid al-Khoee to groom someone for the office of the supreme religious authority and the rectorship of Najaf Parochial School.
Thus the choice fell on as-Sayyid as-Seestani for his merits, knowledge, probility and impeccable character. Accordingly, he started leading the prayer in Imam al-Khoee's mosque, al-Khadra at his life time, writing his annotation on as-Sayyid al-Khoee's manual acts of worship. After the passing away of as-Sayyid al-Khoee he was among the six persons who took part in his funeral, and performed the service on the dead body. 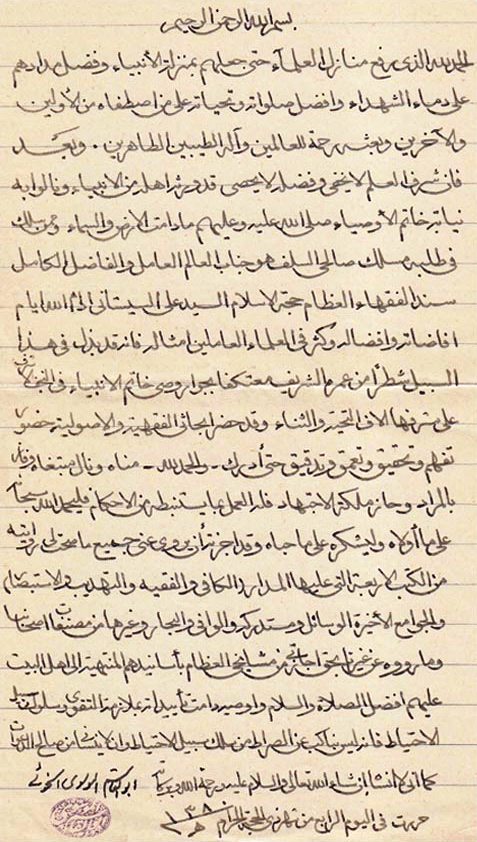